The signs of the past are all around us in Martley. Above the village is Berrow Hill, shaped by a large iron-age hill camp. There is no public access to this site, and so few local people appreciate its scale, which is stated by the official listing as:
“up to 355m long and 155m wide tapering in the centre. The north, north eastern and southern sides are defined by a counterscarp rampart bank up to 1.2m high. The remaining sides are defined by an earthen rampart up to 5.8m high on top of the natural escarpment.”
The camp is probably two thousand years old, and one of several along the hilltops that reach between Abberley and the Southern end of the Malvern Hills. Little is known about the people who built this immense structure, how they used it, or when it was abandoned.

There is a similar lack of information about the people who first settled Martley. Its name, like many others in this part of England, includes the suffix ‘ley’, which usually designated a meadow cleared from woodland. The ‘mart’ part of the name is said to indicate that the clearing was frequented by pine martens, although this may be little more than guesswork. By the Doomsday Book, Martley had 73 households, with the land divided between three Norman French tenants-in-chief, one of which was the King . In the succeeding centuries, Martley passed between various great landowners until the last of these, the second Earl of Dudley, auctioned off his farms in 1920.

The oldest building in the Parish is the Church of St Peter, which has been in continual use since the early years of the 11th Century. 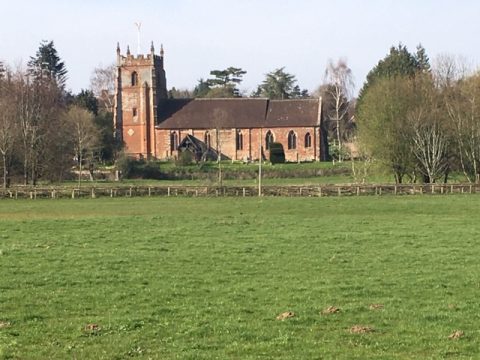 The oldest parts of the building are the walls of the nave (although the windows were inserted many years later). About a hundred years after the nave was completed, the chancel was rebuilt, and after a further two hundred years a tower was added. It is easy to see how masonry skills improved with each stage of construction. The stone for the church was cut from a quarry now called the ‘Scar’, on the side of the road to Clifton. The church has the oldest complete ring of six bells in England, and there is an active bell-ringing squad in the Parish. We are lucky that the Church avoided the kind of partial demolition that passed as ‘restoration’ in the 19th Century. Instead, the Church was restored sympathetically in 1909 by Sir Charles Nicholson, the son of an eminent Australian politician .

Next to the Church is the Old Hall, formerly the Rectory. This is the second oldest building in the Parish, with parts dating from the early 14th Century, although there are numerous additions. This was the home of the formidable Hastings Family, which provided the vicars of the Parish between 1795 and 1958. Its most eminent member was Sir Charles Hastings, who became a physician at Worcester Royal Infirmary in 1818 at the age of 24. He later founded the organisation that became the British Medical Association, funded the development of artisans’ housing in Worcester, and became chairman of the Worcester, Bromyard and Leominster Railway. Sir Charles’ brother, Sir Thomas Hastings, became an Admiral and escorted Napoleon to exile on Elba. A younger brother, Francis, also joined the Royal Navy but only rose to the rank of Rear-Admiral.

There is a cluster of older houses to the North and West of the Church that form Martley Conservation Area. But there was never a large central village in the Parish. Like most parts of West Worcestershire, the population was dispersed in smaller farmsteads and hamlets, many called ‘Greens’. Some of these farmsteads are very old. Tomkins Farm has an early cruck-frame structure dating from the 15th Century, while Upper Hollins Farm has a 16th Century core and Brook Court is a 17th Century structure. The Jewry is the largest timer-framed building in the village, and is of early 17th Century origin. However, the most prominent older buildings around the village are all of late 18th Century and Victorian appearance (although in some cases with an older core), and include the Noak, Martley Court, the Barbers, the Tee and Laughern House .

One building that once dominated the centre of Martley has now disappeared. This was the Martley Union Workhouse (known locally as the ‘Red House’), which was built in 1838 to provide poor relief in 28 local parishes. The 1881 Census shows that there were 110 inmates of all ages and eight vagrants in transit, all supervised by seven staff . Workhouses were quasi-penal institutions, with separate wards and exercise yards for men, women, boys and girls. The complex included a chapel, an infirmary and a mortuary. The workhouse system was finally abolished in 1948, and the Red House was converted into flats. It was sold for re-development in 1973 and demolished. The houses in Mortlake Drive, Badger Close, Vernon Close and St Peter’s Drive were built on the land it formerly occupied.

There are several other changes in Martley that have occurred in living memory. The most striking for older residents is the loss of orchards. Until the 1990s, the fields around the village were full of apple blossom in Spring. This was such a remarkable sight that Sir John Betjeman wrote:
“Martley should be seen when the fruit blossom is clothing all the hills and filling all the valleys with its beauty: there is nothing in England to compare with West Worcestershire in the Spring”.

A second change is the growing number of houses. Between the Censuses of 1841 to 1931, Martley’s population declined from 1400 to 750 . This was the result of increased agricultural productivity and the general decline in farming incomes over this period, both of which reduced the employment of agricultural labourers. This trend was reversed after the Second World War, with the opening of the Lusty Lloyd Loom factory on the site of the trading estates on Berrow Green Road and the building by Martley Rural District Council of the houses on Hollins Lane and Nash Close. However, the two largest extensions to the village were the St Peter’s Estate at the start of the 1980s (which also involved building the Heaton House complex) and the Hopyards Estate three decades later. There have also been several smaller clusters of new houses which have extended the village over neighbouring orchards and fields.

A third change is the growth of the local schools. The present Chantry School and the Primary School were built in 1963 and both have expanded since then. Both are descendants of a much older institution, founded in the reign of Elizabeth I, when the charitable funds that had been used to pay priests to pray for the souls of the dead were redirected into education. The original Chantry School was built in the churchyard and was replaced by a new school building in 1846, which was in turn replaced in 1913 by what is now called the ‘Old Chantry’. Both of the latter two buildings still exist and have been divided into residences. There is also a former infants’ school building on the Berrow Green Road, which is now used as a church hall .

Martley is fortunate in having several local historians. The most productive is Dave Cropp, who has written or edited several works. People interested in discovering local history should join Wichenford Local heritage Group (which also covers Martley).

You can find out more about which cookies we are using or switch them off in settings.

This website uses cookies so that we can provide you with the best user experience possible. Cookie information is stored in your browser and performs functions such as recognising you when you return to our website and helping our team to understand which sections of the website you find most interesting and useful.

Strictly Necessary Cookie should be enabled at all times so that we can save your preferences for cookie settings.

If you disable this cookie, we will not be able to save your preferences. This means that every time you visit this website you will need to enable or disable cookies again.